Study: One of America's Most Dangerous Highways is in NYC 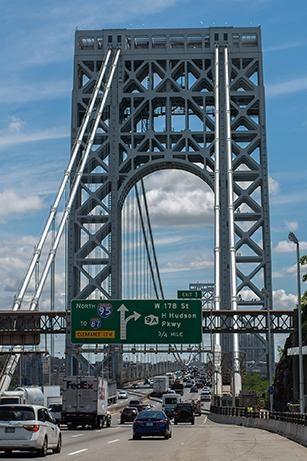 Interstate 95 or I-95 is one of the most dangerous highways in the United States, a report based on a new study on auto-accidents in NYC has found. The highway that helps drivers cross the Washington Heights and the Bronx has three significant accident hotspots. The report by Go Safe Labs, a non-profit organization, included all of the three spots in the list of the top ten least safe places for drivers in 2020.

With more than 100 automobile accidents and crashes reported at each of the hotspots in 2019, researchers are not surprised considering that these sites are also included in the list of most traveled routes in the US.

I-95 Crash Hotspots: A Breakdown

One of the three accident hotspots on the Interstate 95 of NYC is situated where drivers approach the George Washington Bridge and where the Interstate 95 crosses with Riverside Drive. The other two are located at both ends of the Alexander Hamilton Bridge, which connects the Bronx to the Washington Heights.

Go Safe Labs’ findings are based on the 1.8 million records of accidents gathered from 2018 – 2019. The most dangerous of these hotspots is the one at the end of the Alexander Hamilton Bridge on the Washington Heights’ side of the bridge, with 208 crashes recorded in 2019 alone.

The second hotspot with 142 car crashes in 2019 is located on the other side of the Hamilton Bridge; to the Bronx's end. The George Washington Bridge and Riverside Drive crossing crash point observed 132 accidents in 2019, placing it at number seven on the list of the most dangerous routes in America.

The number of crashes on I-95 grew by 6.8 percent from 2018 to 2019. Despite these numbers, Houston tops the list as the city with the most number of hits. On the other hand, New York City is not mentioned in the top ten list of cities with most car crashes. But when we look at the data, the I-95 alone accounts for a significant chunk of the overall highway crashes in NYC.

The dangerous cash points here are surrounded by bridges and overpasses and witness dense traffic for most of the day. The wing-walls, entrance posts, and slopes also increase the risk of crashes.

NYC is known as a dangerous place for commuting due to the high number of car accidents. These accidents injure and kill hundreds of people every year. Road quality and maintenance are the state's responsibility, which means you can hold the government accountable for accidents that happen due to the authorities' negligence.

Sustaining injuries in car accidents could entitle you to financial compensation. Also, if someone is killed in such an incident, their family members can file a lawsuit for damages.

To file a strong case and get compensation, you will need the help of an experienced personal injury lawyer.

Accident lawyers specialize in different cases. By using the service of an attorney who has experience in handling cases similar to yours, your chances of winning the case will increase substantially. Depending on the incident's nature, it would make sense to hire a personal injury attorney, a car accident attorney, a wrongful death attorney, or a pedestrian injury lawyer to pursue your case.

Discuss your case with a personal injury lawyer NYC to find out if it makes sense to file a lawsuit.