A construction site is a busy, and oftentimes dangerous place for someone to be, which is why there are so many safety protocols put in place, and constantly revised, by agencies such as OSHA (Occupational Safety and Health Administration) whose main goal is to protect workers everywhere. Workers, managers, site designers, and everyone else involved in the construction process must stay up to date on the latest OSHA standards and practices through their certification programs and continuing education. In addition to OSHA standards, there are many other avenues for researching, advancing, and improving workplace safety measures for everyone involved.

CONSTRUCTION SITES CAN BE DANGEROUS

The two most important factors for keeping any construction site safe, though, is the people who are working there, and the quality of safety equipment and adherence to safety methods and best practices. When everyone on a job site is adhering to safety measures, and all materials, tools, and safety structures are up to standard, the possibility of an accident is significantly reduced (although never entirely eliminated). In fact, 1 in 5 worker fatalities were construction workers last year, and more than half of those deaths were the result of one of the “Big Four” injuries: falls, being struck by objects, electrocutions, or being caught in or between objects. Most often, these Big Four accidents are caused by an error.

WHY WORK WITH A CONSTRUCTION ACCIDENT ATTORNEY IN NEW YORK CITY?

If you have been injured in a construction accident in New York City, you have rights as a victim that you must ensure are upheld. The best way to make sure that you are getting a fair chance at what you deserve, while also focusing on recovering from your injuries, is to work with a construction accident lawyer in NYC. The award-winning team at Rosenberg, Minc, Falkoff & Wolff, LLP can help you through this process whether you are filing a workers’ compensation claim, a personal injury lawsuit, or are trying to make sense of your options.

Filing a workers’ compensation claim is fairly straightforward, but there are many different obstacles and issues that you may encounter throughout the process that can distract you from recovery. In addition, there are times when you may have other options that you are unaware of, and would have remained unaware of if you were not under the guidance of an experienced legal professional.

Contact us as soon as possible to schedule your free initial consultation, so that we can help you get the compensation and legal guidance that you deserve as you focus on recovering from this difficult and painful experience. 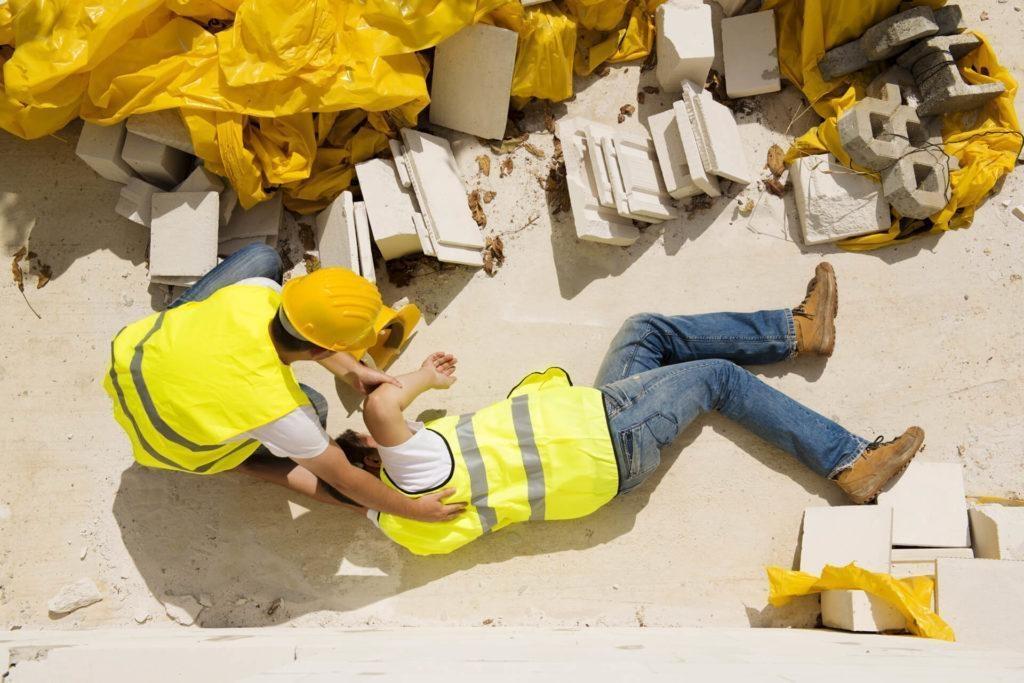 Construction sites are busy places, with sometimes hundreds or even thousands of workers all focusing on their specific tasks in close proximity. Every worker relies on the other workers on the site to prioritize safety, just as they prioritize safety for everyone else. This type of trust is essential for a well-functioning construction site to continue, but even the most diligent sites can experience accidents.

The first four examples below are known as the “Big Four.” Some of the most common accidents, whether due to negligence or not, are as follows:

Falls account for 33.5% of all construction deaths in 2018—338 in total—a percentage that has remained fairly static for quite some time. Note that a fall injury is not the same as being injured by a falling object, which is the next type of injury discussed. Falls can happen because of slippery surfaces or other hazards, but they also include situations where a worker may fall who was not using proper safety equipment such as a harness, tether, carabiner, or the other appropriate equipment for their task.

Falls can be fatal, but in non-fatal falls the victim can suffer from permanently-debilitating injuries such as spine damages, traumatic brain injuries, serious fractures, internal bleeding, and more. The severity of the injuries depends on things such as the height of the fall, but there are many other factors that go into how severe the injuries ultimately are.

STRUCK BY OBJECT INJURIES AND FATALITIES

Falling workers are a serious problem, but so is the issue of falling objects, which made up 11.1% of construction site fatalities in 2018, making it the second-most common fatality on construction sites. These accidents happen when a large object (or collection of objects) fall from a higher platform, crane, or shelving unit, or other location.

These types of accidents can happen due to a crane operator acting dangerously, a load being moved that was not properly secured, or even a worker dropping a handtool that was not properly tethered to their body, causing it to fall and possibly strike a worker below. Depending on the size and weight of the object, as well as the height that it fell from, these injuries can cause serious injuries or be fatal.

When working with both new construction and existing renovations or upgrades, there is always a risk of coming into contact with exposed live wires. Licensed electricians understand the safety standards that they must follow in order to protect the health and lives of all those around them, but even with the most diligent electrician, there is a risk of an accident. Electrocution fatalities made up 8.5% of all construction site deaths in 2018, making it the third death of the “Big Four.”

This kind of accident is characterized by someone being caught between heavy objects; examples include such things as two girders being moved, a large slab being set in place, or other items that are being transported with a crane. Other examples could include someone being pinched between the cab and the trailer of an 18-wheeler, caught in a motor such as a wood chipper, gears, or anything else that someone could be caught in.

According to OSHA, “This category includes construction workers killed when caught-in or compressed by equipment or objects, and struck, caught, or crushed in collapsing structure, equipment, or material,” and it makes up the fourth fatality of the Big Four with 5.5% of construction deaths being characterized as one of these accidents.

OTHER CONSTRUCTION SITE INJURIES AND FATALITIES IN NEW YORK CITY

Some other common injury types on construction sites are:

Whether or not the injury that you have experienced is mentioned here, contact us now to schedule your initial consultation so that we can begin to make more sense of your case and start fighting for what you deserve.

The following are just a few of the questions that we will be happy to answer for you in specific detail during our initial consultation and in the course of our work together. The specific answer depends on a range of different factors in your own circumstances, which is why it is essential that we begin our work together immediately.

In most cases of a construction site injury, your financial damages will be covered by your employer’s workers’ compensation policy, which also absolves them of any additional legal actions such as a personal injury lawsuit. In exchange for their protection from being responsible for any non-economic impacts that an employee may endure, it additionally guarantees that the worker is able to get compensation for an accident that they caused.

This arrangement can sometimes keep people from getting the full amount that they believe they deserve but is intended to maximize the benefit for everyone.

HOW MUCH IS MY NYC CONSTRUCTION INJURY WORTH?

In order to determine how much you deserve for a Workers’ Compensation settlement, we must first understand all of the different economic damages that you have endured. The most important ones are your medical costs and your lost wages, but there are a variety of other things that we will seek compensation for, such as any ongoing medical treatment that you may require, any disability payments that you are entitled to, and more.

Before we are able to determine a fair amount, we will need to go through all of your finances closely.

This type of policy can be either a significant benefit or a drawback, depending on the details of the accident.

ARE THERE SITUATIONS WHERE I AM ABLE TO FILE A LAWSUIT INSTEAD OF A WORKERS’ COMPENSATION CLAIM IN NEW YORK CITY?

While there are situations where you will be able to file a lawsuit instead of seeking workers’ compensation benefits in New York City, these are exceptions to the rule. In order to determine whether or not you have the right to seek compensation through a channel that does not involve a workers’ compensation claim, we will need to take a close look at your case.