To determine the responsibility and liability for an accident involving an e-scooter or e-bike, the way in which the crash occurred needs to be established. If the accident occurred due to the reckless driving of a car or truck driver, then they will be liable for all injuries and damages sustained by riders on e-scooters and e-bikes in New York. On top of this, there are a growing number of incidents of electric-powered two-wheelers causing injuries to pedestrians. In these cases, the drivers of electric scooters and bicycles are held responsible for the injuries caused to pedestrians. 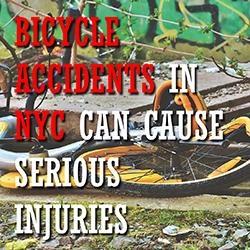 Bicycle Accidents in New York Can Cause Serious Injuries

Liability For Your Child’s Injuries in a Bicycle Accident

Bicycling is good exercise for kids, and can be an enjoyable experience, too, which is why many parents encourage their young children to ride. However, it is equally important to stay alert to the possibility of children being involved in bicycle accidents.

Read more: Liability For Your Child’s Injuries in a Bicycle Accident

Read more: Bike Accidents on the Rise in Brooklyn

Biking Laws You Need to Know in New York

New York is a bicycle- and pedestrian-heavy state, with 1,133 miles of bicycle lanes in New York City alone. Over the last several years, biking has become even more popular in the state of New York, resulting in an increase of bicyclists on the roads. Unfortunately, this can also mean a greater number of accidents. In 2017, 4,397 bicyclists suffered injuries and 24 died throughout all five of New York City’s boroughs. Obeying biking laws can help you avoid collisions.

A bicycle in New York is a two- or three-wheeled human-powered device. Motor-powered bicycles fall under different laws than standard bikes. All bicyclists in the state of New York are subject to the provisions of state and city traffic rules. Laws that apply to motor vehicles and their operators also apply to bicyclists, except where not applicable. Bicycles have a right to the roadways when bicycle lanes are unavailable.