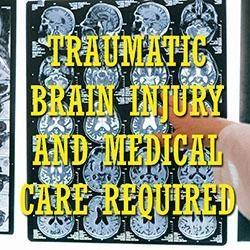 Accidents and other traumas are a leading cause of death for Americans between the age of 1 and 44. It can be difficult to hold on to a job or even carry out everyday chores when suffering from a brain injury. Also, not all brain injuries are similar. Some are mild whereas others can be very severe. Brain injuries don’t need to have an open wound to be considered serious.

Read more: Levels of Traumatic Brain Injury And What Type of Medical Care is Required

Traumatic brain injuries (TBI) take place every 21 seconds in the United States resulting in 50,000 deaths each year. Non-fatal TBI can often cause irreversible damage and permanent alterations to the brain. People with TBIs can suffer from emotional, mental, and physical problems for a long time after their injury.

Accident Victims Beware: Injuries to the Brain Can Lead to Personality Changes

A brain injury can have a major impact on every aspect of your life. New York City brain injury lawyers provide help to victims who sustained injuries affecting their brain. Because of the severity of brain injuries and the extensive array of different symptoms and limitations you can experience as a result of brain injury, it is imperative to understand the full extent of damage when making a claim against someone who caused your brain to suffer harm. Brain injury can affect mood, cognitive function, mobility, your senses, and more. As BBC explains, brain injury can also result in changes to your personality.

Brain Injury Can Cause Changes to Your Personality

Brain injuries can occur in many different ways, including automobile accidents and slip and falls.  Whenever a brain injury occurs, it is important to understand the full extent of the damages and the costs and time associated with recovery. Recovering from a brain injury is often a long and arduous process that can be very expensive. New York City traumatic brain injury attorneys can provide insight into how you can pursue a claim for compensation for losses and damages if someone was responsible for causing your brain injury. A recent article in The Journal News highlighted some of the struggles brain injury patients go through as they try to recover. The story shared by the Journal News was about a 22-year-old who suffered traumatic brain injuries in a motor vehicle accident in New Rochelle. The young man was given just a three percent chance of surviving and a 10 percent chance of waking up from a coma. He did manage to survive the injuries, but his mother describes him as being “basically a newborn” as he must relearn everything he ever knew.

The Long Road to Recovery After a Brain Injury

BRONX, NEW YORK (February 24, 2017) – A scaffolding accident in the Bronx left a woman walking her two children seriously injured as she was walking in Norwood, according to NBC News. Paramedics rushed to the scene of the accident and came across a female pedestrian that was bleeding from the head. She was transported to the hospital in stable condition. The identity of the 39-year-old victim has not been released. Her two children did not appear to be harmed following the collapse. Authorities are still trying to determine what caused the collapse. The sidewalk was sectioned off as investigators tried to determine what happened. There may be liability of the owner of the premises where the accident took place on. This is one of the things that will come out after a thorough investigation.